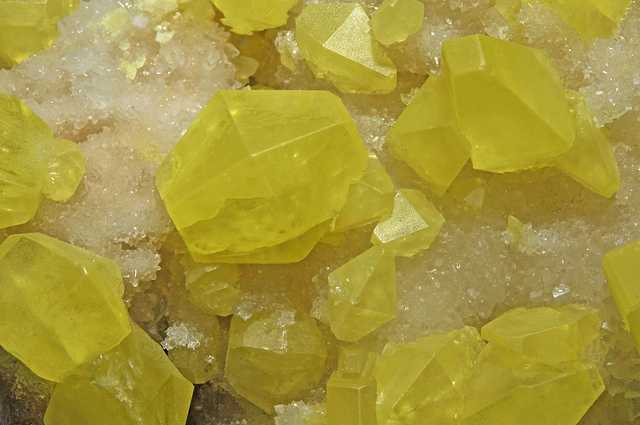 Sulfur is colorless and usually has eight atoms, even though those with fewer atoms are available. A blue flame appears, if the sulfur is burned. As a result, sulfur dioxide is produced, but this in turn produces dilute sulfurous acid. It appears if joined with water. However, the odor doesn’t come from sulfur compounds, at least not the elemental type.

A few compounds, such as hydrogen sulfide, produce unpleasant smells. On the other hand, some are poisonous. Elemental sulfur is used in matches, gunpowder, and fireworks. In addition, it is also used as a insecticide, fungicide and fumigant, in the vulcanization of rubber, in the treatment of certain skin diseases, and in the manufacture of phosphate fertilizers. However, its principal use is in the preparation of its compounds. Sulfuric acid is the most important sulfur compound.

Other important compounds include sodium bisulfite (used in paper manufacture), sulfur dioxide (used as bleaching agent, refrigerant, and disinfectant), hydrogen sulfide, thionyl chloride, and sulfur trioxide (used as reagents in chemistry), carbon disulfide (an important organic solvent), bath additive and magnesium supplement in plant nutrition, epsom salts or magnesium sulfate (used as a laxative), and a number of other sulfate compounds and sulfa drugs. This element has a number of uses and in this article we will discuss all the important uses of sulfur.

Sulfur powder has a number of applications. It is an important component in fungicides, dyes and production of agrichemicals. Additionally, it is also required in waste water processing and mineral extraction. Powdered sulfur can be found in skin cream ingredients and lotions. Burned sulfur helps bleach paper and fruits. The element is part of a number of lotions, bar soaps and creams. There are many skin treatment ointment products in the market which contain this ingredient.

Sulfur contains elements which can eliminate acne, and for this reason it’s included in their treatments. Medications for warts, pityriasis versicolor rosacea, dandruff contain this ingredient. By using this element, seborrheic dermatitis and scabies can be treated. Sulfur is effective because of its antibacterial, anti-fungal and keratolytic properties. A combination of sulfur and alcohol can be used in order to treat acne as well as other skin disorders. Solutions, which contain this element, can be used in order to accelerate the healing of wounds. It was used to cure wounds as far back as ancient Greece. It can be used to treat arthritis, homeopathy, hemorrhoids and hypothyroidism.

The human body and sulfur