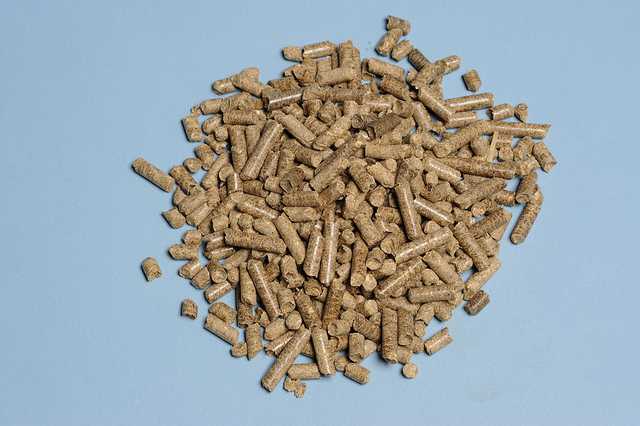 Biomass is a fancy name for material from animals and plants. In order to produce energy, some kinds of biomass can be burned. Wood is one common example. Biomass contains stored energy, because plants absorb energy from the sun through the process which is known as photosynthesis.

This stored energy is released as heat when biomass is burned. Burned biomass releases carbon dioxide, but plants take carbon dioxide out of the atmosphere and use it to grow their stems, branches, flowers, and leaves. When the plants are burned, that same carbon dioxide is returned to the air.

A number of different kinds of biomass, such as corn, wood chips, and some types of garbage, are used to produce electricity. On the other hand, some types of biomass can be converted into liquid fuels, which are better known as biofuels that can power tractors, trucks, and cars. Leftover food products, such as animal fats and vegetable oils, can create biodiesel, while sugarcane, corn, as well as other plants can be fermented to produce ethanol. In this article we will discuss all the important uses of biomass energy.

Most of us are familiar with the use of biomass for basic life functions by all humans and animals. All the food we eat contains biomass, whether animals, vegetables, or products which are derived from them. The energy, which is found in these foods, is what sustains life in each living organism on the planet. However, in this article we will more on the production of energy for industrial, commercial, or residential applications than for food.

Most biomass can be burned (combusted with oxygen in air), since it’s in solid form. The combustion process generates heat the same way that burning coal gives off heat. The heat generated by the burning of biomass can be used for cooking, for heating water, and for space heating (for example, heating of buildings). Additionally, it can be also used to boil water in order to generate steam, which in turn is used to run an electric generator and turbine to produce electricity in the same way that coal is used to generate electricity in a coal-fired power plant.

Wood contains chemicals that volatilize when they’re heated. Most of this volatile matter oxidizes and contributes to the energy being released in the combustion process, during the combustion of wood in air. On the other hand, when wood is heated in the absence of oxygen or air, the volatile matter is driven off of wood in a process known as pyrolysis, and the remaining matter is called charcoal.

READ  How Do We Remember?

Charcoal, which is almost pure carbon, contains about twice the energy content per unit mass as the original wood. For this reason, it can burn at much higher temperatures than wood. But, in order to make 1 kg of charcoal, it takes about 4 to 10 kg of wood. Additionally, the volatile gases, which are driven off from the wood during pyrolysis, will contribute to greenhouse gas emissions, if they are not collected and used.

Liquid fuels, which are produced from biomass, are used in order to extend crude oil resources by substituting for diesel fuel or gasoline. Even though there are different ways of producing gasoline-like liquid fuels from biomass, ethanol is the most common gasoline substitute. Biodiesel is the common diesel substitute. Biodiesel is normally produced from animal fats, vegetable oils, or greases. The process involves the use of alcohol and catalyst. The catalyst is typically potassium hydroxide or sodium hydroxide, which is dissolved in methyl alcohol.

Every type of used cooking oil or vegetable oil can be used to make biodiesel. Today, most biodiesel is made from soybean oil. The production of biodiesel from algae is still in the experimental stage. It is expected that algae produce from 10 to 100 times more biodiesel than soybeans and other seed crops. The process known as fermentation is the most common method for producing ethanol from biomass. It is an anaerobic biological process in which sugars are converted to alcohol. This is done by the action of microorganisms, such as yeast.

For centuries, people use fermentation in order to make wine and beer. This process requires sugars. If the carbohydrates contained in the starting biomass are starch, then the starchy material first has to be converted to sugars. Corn is the most common crop used in the U.S. for making ethanol for gasoline additive. On the other hand, in tropical countries, such as Brazil, the crop of choice is sugar cane.

As you may already know, anaerobic digestion of organic matter produces organic gas (mostly methane). For example, some natural processes are the burping of cows and production of landfill gas in municipal landfills. Under controlled conditions, biomass can also be converted to biogas. This is known as a digester. Animal waste, such as manure, is usually the organic matter used for this purpose. The anaerobic digestion is, in fact, a biological process, which is carried out by bacteria in the absence of oxygen.