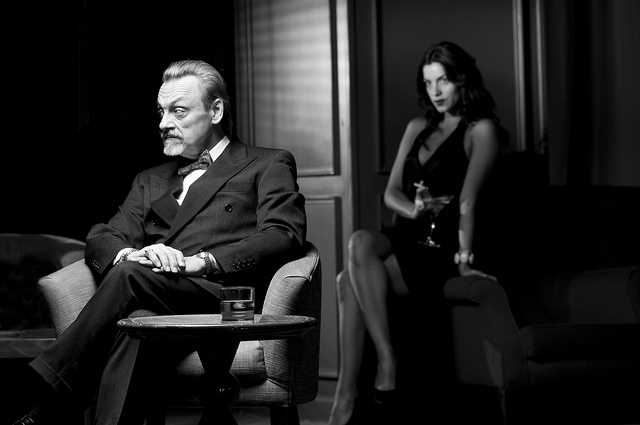 Film Noir is only organic artistic movement of Hollywood. Beginning in the 1940s, many screenplays, which were inspired by hardboiled American crime fiction, were brought to the screen, mostly by European directors, who shared a certain storytelling sensibility: overtly theatrical, highly stylized, with imagery usually drawn from an earlier era of German expressionist cinema. Otto Preminger, Billy Wilder, and Fritz Lang, among others, were among this Hollywood vanguard.

During and after World War II, film audiences responded to this vivid, fresh, adult-oriented type of movie, as did many directors, writers, actors, cameramen eager to bring a more mature world-view to Hollywood product. Many studios began cranking out crime thrillers as well as murder dramas with a particularly venomous and dark view of existence. In 1946, Paris retrospective of American movies, embargoed during the war, clearly revealed this trend toward more cynical crime melodramas.

Several Gallic critics named this new type of Hollywood product “Film Noir,” or black film (literally translated). Several, if any of Hollywood artists called these movies “Noir” at the time. However, the vivid co-mingling of lost innocence, desperate desire, doomed romanticism, hard-edged cynicism, and shadowy sexuality which was unleashed in those post-war years proved hugely influential, among both industry peers in the original era, and to future storytellers.

To this day the debate goes on as to whether “Noir” is a style of storytelling, or a film genre. This debate, in which there is no correct answer, is only one of the things which keep Noir fresh for future generations of movie lovers.

10 most important things you should know about Film Noir:

1. Film Noir is a French term which means “black film,” or film of the night. It has been inspired by the Series Noir.

2. Locations reek of the shadows, of the back doors of fancy places, of the night, of alleys, of taxi drivers and bartenders who have seen it all, and of apartment buildings with a high turnover rate.

3. Relationships in which love is just the final flop card in the deadly poker game.

4. Everybody in film noir is smoking. The best smoking movie of all time is “Out of the Past,” with Kirk Douglas and Robert Mitchum.

5. Women who would kill you even if they love you.

6. It is a movie that at no time misleads you into thinking there is going to be a happy ending.

7. Women in Film Noir: floppy hats, lipstick, boudoirs, low necklines, mascara, dressing rooms, high heels, calling the doorman by his first name, mixing drinks, red dresses, elbow-length gloves, having soft spots for alcoholic private eyes, having gangsters as boyfriends, sprawling dead on the floor with each limb meticulously arranged and every hair in place, and wanting a lot of someone else’s women.

8. Men in Film Noir: suits and ties, buying yourself a drink out of the office bottle, fedoras, shabby residential hotels with a neon sign blinking through the window, all-night diners, being on first-name terms with homicide cops, cars with running boards, protecting kids who shouldn’t be playing with the big guys.

9. Films are shot in black and white, or they look like they were.

10. The most American film genre, since no society could have created a world so filled with doom, betrayal, fear, and fate, unless it was essentially optimistic and naïve.